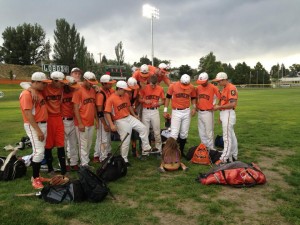 Crater Baseball -Central Point Legion Post 129-completed its undefeated run in the 2013 American Legion ‘A’ Northwest Regional Tournament with a 10-0 victory over Northern Utah. At the ‘A’ level, there is no national tourney.  The kids also did it with class, winning the Sportsmanship trophy, which was awarded by the umpires. Additionally, Ty Fix was named the tourney MVP. The Comets finish the season 40-13. Bobbio’s Pizza will be hosting a Championship Reception for the team Thursday, August 15th, at 3:30. The boys are expected to arrive (directly from Montana) at approximately 4:00. 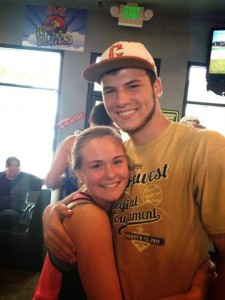 Round 1: From Wheatland, Wyoming, Friday, August 9: Central Point defeated Roy, Utah, 19-3. They play Laramie, Wyoming at 11:30 PDT in 2nd round winner’s bracket action on Saturday, August 10th. You can listen to the game on WheatlandRadio.com.

Round 2: Announcers are calling the Central Point team “The best team in this tournament” after the Comets beat Laramie 12 to 1 in second round play. The Comets will play Laurel, Montana, tomorrow (Sunday) at 5 p.m. Pacific Time. Listen live by clicking here. Or even better, come on down to Bobbio’s Pizza and watch the game live on the big screen!  UPDATE: The estimated start time was delayed by about an hour due to thunderstorms. Check that. Now it’s a 5:30 start.

Round 3: Central Point is assured of a spot in the Championship Game on Tuesday after beating Montana 9-7 today. The Comets play again tomorrow against Alaska, but they advance regardless of the outcome. A win on Monday, however, means their opponent would have to beat them twice on Tuesday. You can watch or listen to tomorrow’s game at 5 p.m. by following this link. We’ll also be gathering at Bobbio’s for another attempt at watching it. (Our apologies for the technical difficulties today. The feed from Wyoming was disrupted and the links to the radio segment had changed). Go Comets! 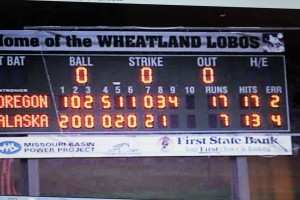 Round 4: Central Point defeated Alaska 17 to 7. They’ll play Tremonton, Utah, tomorrow (Tuesday) at 11:00 Pacific time. Because the Comets are the lone unbeaten team, Utah would have to beat them twice to deny them the championship. You can listen and watch the game live or pre-recorded by following this link. Bobbio’s will again have the game on the big screen. Hum Babe! 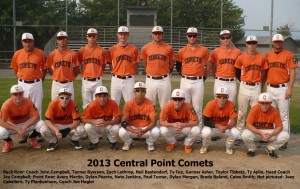 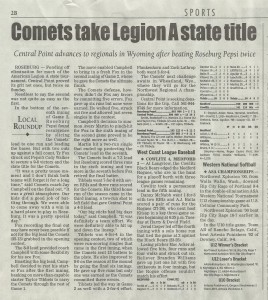 The 2013 American Legion ‘A’ State Champions.