The Comets came from behind to knock off a tough LaGrande team with a 6-5 win. Crater trailed 1-5 heading into the bottom of the 6th inning, but immediately loaded the bases. Dylan Pearce then tripled to right-center, making the score 4 to 5, but was himself stranded at third. Gunnar Asher lead off the bottom of the 7th with a double down the left-field line and Neil Bastendorf followed with a bunt. The ball was about to roll foul, but the LaGrande catcher fielded it and attempted to throw out the runner advancing to third, giving Crater the tie when the ball rolled into left field. After another bunt to move Bastendorf to 2nd, Nate Jenkins singled in the winning run. Gunnar Asher, who pitched to one batter in the 7th, earned the win on the mound. The Comets now take on North Medford at 7 p.m. on Friday night. 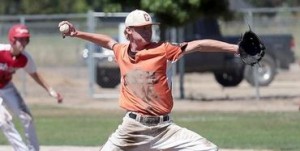 Crater defeated Roseburg Pepsi in their first game of the 2014 American Legion A Tourney at Harry & David. The win advances them to the 7:30 p.m. game tomorrow (Thursday) versus the winner of the South Medford/LaGrande game. Crater turned four non-traditional double plays including a pivotal 2-6-5-4. The Mail Tribune story about the win can be viewed by clicking here.

The Crater Baseball American Legion A team won the 2014 league title and now moves on to the state tourney, which this year is being held at Harry & David Field. The team’s first game is Wednesday, July 30th, at 12:30 against Roseburg Pepsi. The Mail Tribune ran an excellent article on the tourney, which can be read by clicking here.